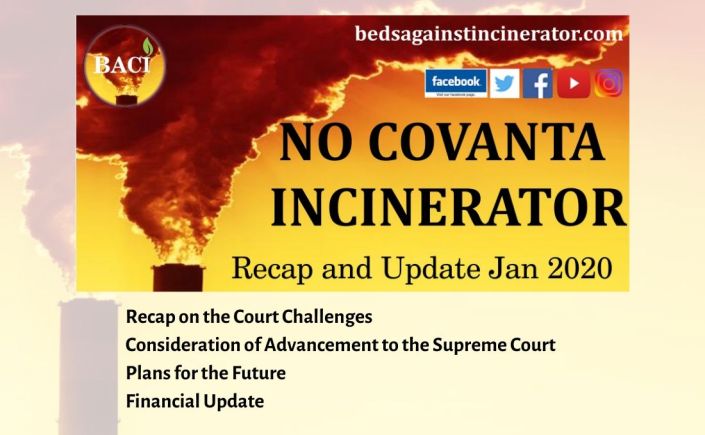 Following the decision by the Court of Appeal to dismiss BACI’s appeal against the High Court ruling – the BACI committee have been revisiting the court decisions as well as considering and planning various activities for the continuing campaign.

Recap on the Court Challenges

The claim itself had evolved over the course of the legal challenge:-

In the High Court  – the claim initially concentrated on the erroneous science and the ability of proposed techniques in Covanta’s permit application documents that were not challenged by the EA.  The High Court ruling concluded that although there wasn’t any evidence in the permit or decision document that the EA had picked up on the erroneous science – that as the ‘expert regulator’ – the Judge believed that it was highly unlikely – with its scientific expertise – that the EA adopted this science in its decision making process.  Full Judgment can be seen here.

In the Court of Appeal – the claim expanded more to exploring the EA’s responsibility under the (Industrial Emissions Directive) IED regarding emissions to water – and to the absence of requirement of monitoring from the permit itself.  The Judgment of the 3 Judges on this occasion was that the High Court Judge was correct and the Courts view on ‘Expert Regulators’ has been to traditionally afford them “an enhanced margin of appreciation in cases … involving scientific, technical and predictive assessments”.  The judgment also puts a lot of store on the ‘enforcement powers’ of the EA.  These may in some cases exist on paper – but from our findings would appear to have little practical application.

In BACI’s view there remains considerable problems with the permit that the EA has issued to Covanta – mainly:

1.The discrepancy in the permit of directly incorporating sections from the Supporting Information Document that describe the operating techniques of “The discharge from the interceptors will be tested periodically” at 2.3.1 (incorporated in table S1.2 as whole section 2.3) and  “there will be no requirement to undertake monitoring of emissions to water” at 2.5.3 (incorporated in table S1.2 as whole section 2.5). These conditions of the permit –  although worded slightly differently-  boil down to the same action or inaction. The only point source emissions to water as described at table S3.2 in the permit is “Uncontaminated surface water run-off via interceptor”. Therefore the discharge from the interceptors is accepted as the only source of emissions to water. Therefore this discrepancy would appear to render the permit impossible to comply with.

2. Although the permit contains statements such as “uncontaminated water discharge only” and “shall not cause pollution” – these are in words only as without any enforcement of meaningful testing/monitoring of the water discharge there is no definable way of proving that the discharge is uncontaminated and pollution free.  The EA push this further by stating in the permit wording the following condition -“Emissions of substances not controlled by emission limits (excluding odour) shall not cause pollution. The operator shall not be taken to have breached this condition if appropriate measures, including,but not limited to, those specified in any approved emissions management plan, have been taken to prevent or where that is not practicable, to minimise, those emissions.”  The surface water discharge does not currently have any emission limits.  However – it has been agreed by all parties during the Court Case that heavy metals have the ability to dissolve in contact with water and that therefore the proposed silt interceptors on the surface water system will not prevent the metals that have dissolved being discharged.  Effectively – this means that even in the event that any monitoring of the water discharge does take place and pollution is found to have occurred – the EA have no powers to fine etc due to this condition in the permit.

Despite the above the EA clearly still consider their permit to be correct as they have defended it though two Courts systems.

Consideration of Advancement to the Supreme Court

One of the first considerations was regarding taking the Court Case further on to the Supreme Court.  Although the claim against the EA was dismissed by both lower Courts – the ability to petition the Supreme Court still existed.

We only had 28 days from the date that the Court of Appeal handed down the judgment to decide to move forward with this action.

Our legal team advised us that a petition to the Supreme Court is usually only taken seriously if there is a QC involved – and our Barrister spoke to several QC’s at his Chambers about our case.

Our Barrister did find a QC that was very encouraging about the claim in the Supreme Court and was willing to be included.  However – this happened very late in the 28 days allowance.

The pros and cons considered by the BACI committee were:-

The decision was taken to reluctantly bring the legal challenge under Judicial Review to a conclusion at the Court of Appeal stage.

It has been of great disappointment that the Courts seem unable to shake the notion that the EA are the expert regulators and therefore must know what they are doing.

We are currently under a country-wide threat as the number of Incinerators proposed and sanctioned is growing all the time – therefore it is imperative that the EA permits competently. It is still relatively new territory for the EA to have to permit for large plants of this nature – that have a much bigger potential to harm the environment unless they have competent permits that at the very least complies with basic common sense and further provides the mechanism by which the Industrial Emissions Directive can be upheld and enforced.

There is a lot of attention at the moment on the quality of the water in the US due to years of putting big business interests above environmental interests. We need a strong EA with competent permitting skills – not a complacent EA that continue to be shielded by the judicial system – to ensure we don’t face the same situation as the US 10 years or so down the line.

Plans for the Future

Once we had decided that the Supreme Court was off the table – the Committee met to discuss the future.

Although we hope that Covanta will never get to a stage where the Incinerator becomes operational – we have taken on board that many of our members are interested in the purchase of some independent air monitoring equipment – so we are not reliant on the figures produced by Covanta themselves and in order to establish baseline readings.

We are conscious that we need to ensure that the monitoring equipment is professional enough to be taken seriously by the Environment Agency and we are researching into this more before making any final decisions.

We are keeping the BACI fundraising system open in order to facilitate a co-ordinated community response to this and we are also exploring other possible funding avenues to help with the purchase of the equipment necessary.

Covanta do still have over 2 years of build time left and we feel its important to plan and ensure we are investing in the correct equipment rather than steam ahead and regret not taking the time now.

The committee also discussed a programme of awareness events/activities.  The current plans include demonstrations, competitions and increase social media presence.

We will also continue to question Covanta and the EA at every opportunity through the established paths we are already involved with.  In addition we will be looking to increase our presence in other related local issue areas to ensure the threat of the Incinerator to our communities continues to be discussed and challenged.

We would like to extend much thanks to the Lush Charity Pot Fund who with a substantial donation has brought us in the ball park of our current Fundraising Target.

Although we have some known Court Awarded Costs still to be invoiced – we have received the final invoice from the Solicitors in relation to the Case at the Court of Appeal.

We had agreed a overall amount with them for the last stage of the Hearing at the Court of Appeal prior to the proceedings to allow for us to set a Fundraising Target.

However – we are pleased to announce that the final invoice from our Legal Team has come in at a lower amount than the agreed figure and we should have a surplus of around £4,000 to put towards the continuing campaign.

Once all outstanding costs are completed we will publish the accounts for the full campaign during the Legal Challenge in both the High Court and the Court of Appeal.